Lust bomb: One pill a day keeps the affection away
Sale 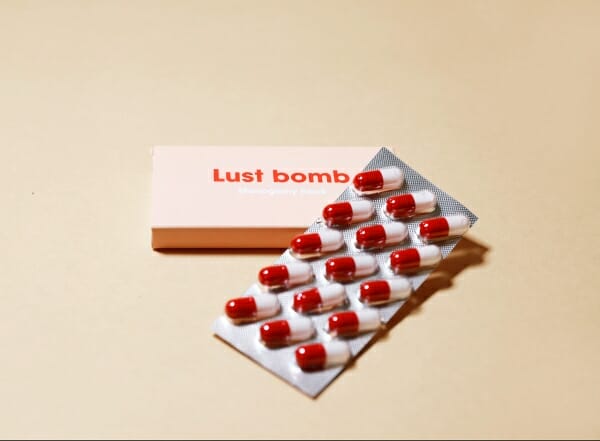 One pill a day keeps the affection away

Hack your hormones with the ‘Lust bomb’. With just one pill your sex life will turn into a series of highlights, without ever having to commit to another person.

A night out with your friends ends in an anything but serious one-night stand.
As it turns out, the romance is short-lived. But after this night you notice that your body still yearns to relive this one-time fling. How come?

Your hormones are to blame! Oxytocin, vasopressin and dopamine, also known as the monogamous molecule, are physically tying you to your one-night stand. Luckily there’s a simple solution! Hack your hormones with the ‘Lust bomb’.

The Lust bomb contains aphrodisiacs from figs, oyster juices and ginseng for
an instant feeling of lust. The addition of caffeine enhances concentration and performance, and eliminates fatigue. This way, we ensure that your body is brought from a resting position to an active position.

Exorphins are morphine-like nutrients that tone down the effect of the body’s own endorphin production. They inhibit the action of receptors in the mesolimbic dopamine system, slowing down the release of dopamine.

Aspartame provides the sweet taste while also disturbing the endorphin system. It’s an artificial sweetener that is 200 times as sweet as regular sugar.

* All of these ingredients are fictional.
The ‘Lust bomb’ is a strip of strawberry flavored candies.

When I arrive at the restaurant, Mark is already waiting. Of course he was right on time, not one of my strong suits. I rush towards the table and we great each other a bit too intense for my taste. We talk about all sorts of things and I feel my cheeks glowing from the red wine. In terms of looks, Mark is exactly my type. Tall, blond curls and deep blue eyes. We laugh a lot, but I also notice our ideas about the future couldn’t be more different. I try not to think about it and take another sip from my wine. For a moment I’m second-guessing my decision to go home with him. My body is aching for sex, but my head is telling me otherwise. I decide to go home with him anyway: it must be the alcohol talking!
It’s my first time at his place. “I had a really nice evening, but I’ve noticed you were a bit absent-minded,” he says. I’m afraid to look at him. “It’s just my fear of commitment,” I mumble. Before he even gets the chance to kiss me, I pull out a pill from my pocket. “Do you mind me taking this?” His face is hard to read.
“Then I’ll take mine too” he replies.

When I wake up, I feel a bit odd. I want to go home as soon as possible. The pill worked its magic last night. I felt extremely confident and my entire body was glowing. The sex was amazing. But despite this incredible night, I don’t feel the need to hang around. As Mark is still asleep, I dress myself and leave quietly.
When I’m outside I send him a message to let him know I left. While on the bike, I feel I had too much to drink last night. My head is throbbing and my mouth is dry. Cold shivers run down my spine and the amazing moments from last night seem very far away. I’m alone again.

Oxytocin and vasopressin are connected to the endorphin system. The ingredients in the ‘Lust Bomb’ disturb this system, making it very hard for the monogamous molecule to do its job. In other words: an explosion of lust, without any commitment afterwards.

Oxytocin is produced in both men and women during physical contact. The feeling of trust and connection is stimulated and the body calms down faster. Besides oxytocin, men also produce vasopressin. This causes territorial and possessive behavior, thus creating the urge for commitment. Like oxytocin, vasopressin stimulates both our social brain and social memory. In the case of enjoyable physical contact, dopamine encourages us to repeat this, allowing the monogamous molecule to do its job.

But there’s a catch! Our brain can mislead and blind us. When oxytocin is released, your brain can’t distinguish a one-night stand from a long-term relationship. The stimuli from touching and the effect of the monogamous molecule tricks us into thinking we are willing to engage. While the opposite could just as easily be true. This blinding phenomenon holds us into its grip, both physically and mentally, and causes areas connected to pain to flare up when this intimate relationship gets broken off. Sex makes us believe we’re willing to engage, but how do we know if it’s true love?

A beautiful pill box filled with strawberry flavored placebos, a great giveaway for all your single friends.

Actual product may vary due to product enhancement

There are no reviews yet.

Be the first to review “Lust bomb” Cancel reply

This website uses cookies to improve your experience while you navigate through the website. Out of these cookies, the cookies that are categorized as necessary are stored on your browser as they are essential for the working of basic functionalities of the website. We also use third-party cookies that help us analyze and understand how you use this website. These cookies will be stored in your browser only with your consent. You also have the option to opt-out of these cookies. But opting out of some of these cookies may have an effect on your browsing experience.
Necessary Always Enabled
Necessary cookies are absolutely essential for the website to function properly. This category only includes cookies that ensures basic functionalities and security features of the website. These cookies do not store any personal information.
Non-necessary
Any cookies that may not be particularly necessary for the website to function and is used specifically to collect user personal data via analytics, ads, other embedded contents are termed as non-necessary cookies. It is mandatory to procure user consent prior to running these cookies on your website.
SAVE & ACCEPT